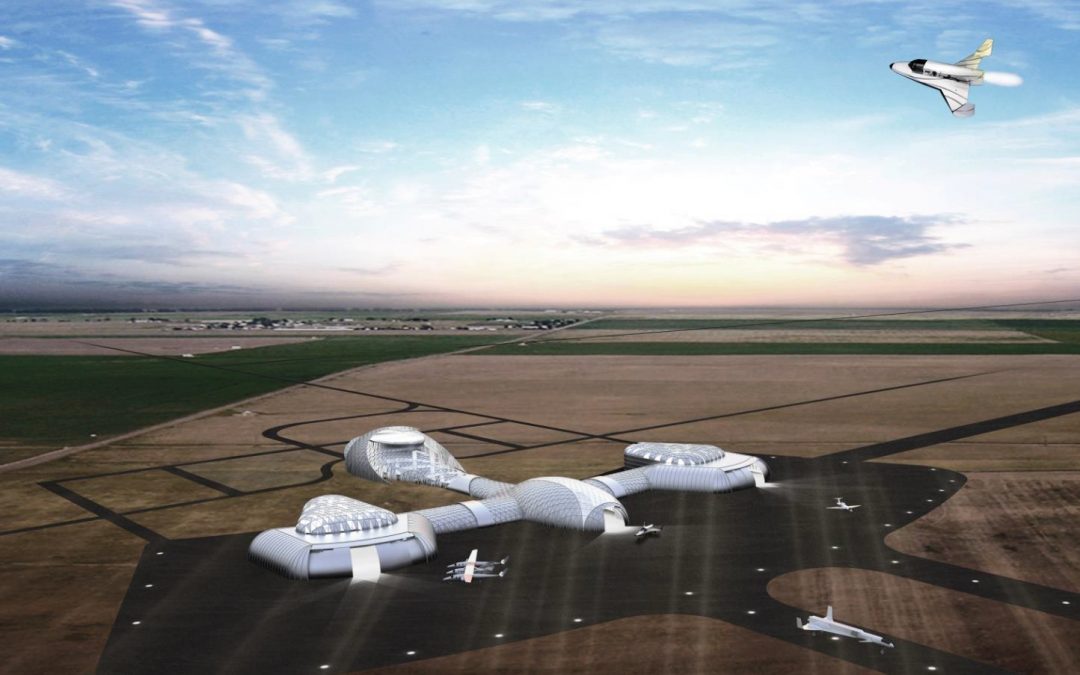 We live in exciting times. That’s the message from leaders at the Colorado Air and Space Port (CASP) and the 460th Space Wing at Buckley Air Force Base. Space travel and defense technologies — once only imagined in science fiction — are being developed and implemented at locations just minutes away from every Aurora doorstep.

The development of CASP and the soon-to-be-named Buckley Space Force Base make it a compelling time not just for Aurora, but also for the whole Denver metro area and state of Colorado, said Kevin Hougen, Aurora Chamber president and CEO.

The two facilities, along with Denver International Airport, have created what Hougen calls a “platinum triangle of opportunity,” providing billions of dollars in economic impact.

CASP at the former Front Range Airport in Watkins, a few miles from Aurora’s eastern edge,  received its Launch Site Operator’s License in August 2018. Only the 11th such license granted in the nation, it permitted the facility to host horizontal spacecraft launches for suborbital and orbital flights anywhere from 62 miles to thousands of miles into space.

While continuing general aviation operations and serving as a home to the Colorado 5th Battalion, 19th Special Forces Group (Airborne), the new hub of space transportation, research, and development is attracting companies that have plans for space travel within the next five years.

Already, the port has a total economic impact of 915 jobs, more than $46 million in payroll, $116 million in business revenues and $69 million in related financial contributions, according to the latest CDOT Aeronautics Impact Study. With the growth of aerospace activities, those numbers will only increase, says David Ruppel, director of CASP.

Meanwhile, Buckley is one of only six major Air Force Bases being re-designated, due to the creation of the U.S. Space Force (USSF) in December 2019. The others are Schriever and Peterson in Colorado Springs, Vandenberg and Los Angeles in California and Patrick in Florida. USSF also includes five additional smaller bases.

This is the first time since the Air Force was founded in 1947 that the Department of Defense created a new branch of military service. The mission of the USSF is to organize, train and equip troops to protect U.S. and allied interests in space and provide space capabilities to the joint force.

As a Space Force Base, Buckley will continue to provide nearly $1.3 billion in economic revenue to the area, with 15,000 jobs and all the related economic activities required to run an installation responsible for delivering the nation’s missile warning, missile defense and battlespace awareness systems. All current service members at the base will remain for now, and their mission will not change.

The Space Force designation hasn’t driven any additional jobs or changes to the facility, yet. “We can’t speculate on any future changes as a direct result of the re-designation,” says 2nd Lt. William Gomez, 460th Space Wing public affairs officer. “Nothing is changing but signage, so you may see different signs at the entry gates and around the installation.”

The most notable change, for now, seems to be the increased sense of pride for the community, as described by Col. Devin Pepper, 460th Space Wing commander at Buckley.

“It’s pretty special to have every branch of service at this installation now, including the Space Force, right in Aurora’s backyard. Most communities don’t have an installation like this,” Pepper says. “No one else does what we do, and we’ll continue to train and develop space-smart warriors to dominate today’s multi-domain fight and prepare them for tomorrow’s challenges. It’s a very, very exciting time.”